The town of Cardston was the first of what would become several Mormon settlements in Southern Alberta, Canada. Its colonizer, Charles O. Card, came seeking refuge from prosecution in the U.S. due to his practice of plural marriage. On President John Taylor's advice, he went first to British Columbia in search of friendlier territory. There, he found nothing available that was to his liking. Hearing from a mountaineer of the “buffalo plains” of Alberta, he reportedly said to his traveling companions, “If the buffalo can live there, we can. Let us go and see it.”

In late October 1886, Charles selected the site of the future town of Cardston at Lee’s Creek, and by late the next spring his wife Zina and several other families had arrived at the new settlement. Charles set to work building the town that would soon bear his name, establishing a Sunday School within a few weeks and opening a general store.

During its first few years, Cardston’s population grew gradually as other polygamist families sought refuge in Canada. By the time the LDS practice of plural marriage officially ended in 1890, land shortages in Utah and Idaho were driving young farmers north to seek a living in Alberta, where a $10 entry fee and cultivation of the land was enough to secure a homestead.

As Charles Card’s health began to decline, he invited Edward J. Wood, recently returned from a mission in Samoa, to assume management of his store. Wood agreed and arrived in Alberta in 1901. Wood was not only called upon to fill Card’s shoes as a business leader, but as an ecclesiastical leader as well. In 1903 he was called to serve as president of the Cardston Stake, an office he held for thirty-nine years. Among other things he oversaw the construction of the first Cardston Tabernacle from 1904 to 1912.

Cardston’s population continued to grow gradually, and by 1906 the town was home to a thousand people. In 1913, the dreams of many of the early Alberta pioneers were fulfilled when President Joseph F. Smith announced that a temple would be built in Cardston. The temple would be the first outside of the United States and notable for its modern design and lack of a large assembly room. Ground was broken on November 9, 1913, and construction continued intermittently for ten years. The edifice was finally dedicated by President Heber J. Grant on August 26, 1923. When the temple was completed, Wood was called as its first president, serving from 1923 until 1942.

Cardston today is home to more than 3,500 people and is still a predominantly LDS farming town. There are two Cardston LDS stakes encompassing sixteen area wards, and the temple continues to serve the large Latter-day Saint population in the region.

Hearing from a mountaineer of the “buffalo plains” of Alberta, Charles Card reportedly said to his traveling companions, “If the buffalo can live there, we can. Let us go and see it.” 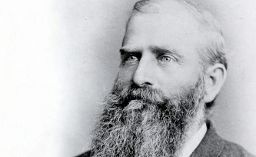 The Alberta (now Cardston) Temple was the first temple built outside the United States, the first without spires or an assembly room, and the first with a design bid on by professional architects. 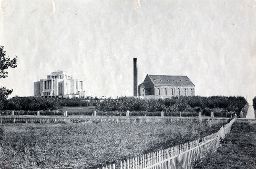 A Tabernacle in the Wilderness

Completed in 1912, the old Alberta Stake Tabernacle served the religious and civic needs of Cardston and neighboring communities for more than forty years. 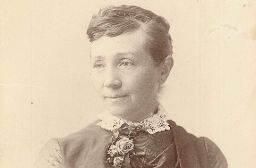 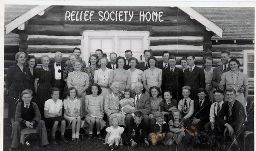 Decades of dedication as president of both the stake and the temple made Edward J. Wood an inextricable part of the story of Cardston, Alberta.