With the villages of Stirling and Magrath established, LDS mining magnate Jesse Knight saw an opportunity halfway between the young Canadian towns.

In 1901, Knight sent two of his sons from Utah to Alberta, where they purchased 30,000 acres of land between the two small LDS communities now linked by an irrigation canal. Knight visited in the spring of 1901 and quickly decided to build a sugar factory. He signed a contract with the Canadian Northwest Irrigation Company and the Alberta Railway and Irrigation Company that pledged he would build the factory and cultivate sugar beets in the new town—dubbed Raymond, for Knight’s oldest son—for at least twelve years. He secured 226,000 additional acres for the project and went to work establishing the town.

The first family of settlers arrived from Utah in 1901, and more soon followed. In October 1901, the Deseret News in Salt Lake reported on the growth of Raymond, saying Knight would have “land to sell to the beet raisers at reasonable prices. … This is a good country of great possibilities for the home-seekers who are zealous and willing to work.”

The town drew many LDS settlers and by 1902 was home to a $4,000 meetinghouse that one observer called “easily the finest church edifice in Alberta.” A visitor reported back to Utah that “a more happy, prosperous, united and moral community cannot be found than that of Raymond.”

After a first winter that saw many residents living in tents and busily plowing land in preparation for the beets and grains that would grow there, the town developed rapidly. In 1902, restaurants, barns, homes, and stores were added to the landscape, and by 1906 Raymond’s population was 2,500.

Raymond soon became home to the Taylor Stake, the second stake created in Alberta. Rivaling Cardston in population, Raymond was one of two sites proposed as the location for the Alberta Temple in 1913. The honor, however, went to Cardston.

By the end of Knight’s contract in 1913, economic conditions were averse enough to the sugar business that Knight shut down his factory. Raymond worked to entice another sugar company to town, and in 1925 succeeded in bringing the Utah-Idaho Sugar Factory to Canada. The industry remained in Raymond until 1963, when the sugar business left town for good.

Today, Raymond has a population of more than 3,700 people and is home to an LDS stake that includes nine wards.

Jesse Knight first settled Raymond (named for his son) in 1901 as a business venture. It became a thriving Latter-day Saint community fueled by the sugar industry. 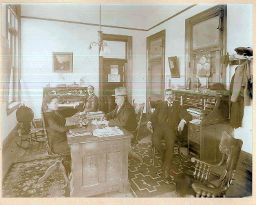 Jesse Knight's benevolent use of his mining fortune earned him the nickname "Uncle Jesse."

A brief video outlining the history of Raymond.