The first settlers of Stirling, Alberta, Canada, came in answer to a prophet’s call. With the Mormon community of Cardston, Alberta, already well-established about sixty miles away, the LDS Church struck a deal with the Alberta Irrigation Company to send settlers and workers to western Canada in exchange for land and pay.

In April 1899, Church President Wilford Woodruff called Theodore Brandley, a Swiss-born bishop living in Richfield, Utah, to oversee the establishment of a colony of Saints in southern Alberta. Brandley and others were tasked with building the Galt Canal and then remaining in Canada to sustain the region’s new irrigation system. The first group, led by Brandley, arrived near the future site of the village of Stirling on May 5, 1899, and quickly set about building houses, digging wells, securing fuel, and establishing crops.

Further immigration was encouraged in Salt Lake with articles in the Deseret News that touted Stirling as a home of “good crops without water.” The piece declared one man’s success in producing ”fifty-seven bushels [of wheat] to the acre, with no irrigation water on it. That we think is hard to beat in any other country.”

Stirling’s settlers built the town using the distinctive pattern of Joseph Smith’s “Plat of the City of Zion.” The system featured roadside irrigation ditches and unusually wide streets laid out in a grid pattern oriented to the cardinal points of the compass.

By November 1899, the town was established and the canal completed, two weeks ahead of schedule. Roughly two years later, the town of Stirling was declared a village, in September 1901. Today, the Village of Stirling has a population of just under 1,100 people and is still home to two LDS wards. In 1997, Stirling was designated a National Historic Site of Canada and called the “best surviving example of a Mormon agricultural village.” 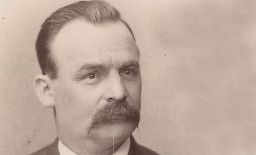 "Bro Taylor took my hand and said: 'Bro Brandley you will be blessed & prospered in all you undertake to do in Canada' which gave me much encouragment."

A brief video outlining the history of Stirling.