The Cody Mural Chapel, located in Cody, Wyoming, features a large domed ceiling with a mural depicting the early history of The Church of Jesus Christ of Latter-day Saints. The mural illustrates the beginnings of the Restoration of the gospel of Jesus Christ and the dedication of early Latter-day Saint pioneers. The chapel and visitors’ center are open to the public during the summer months, with historical artifacts on display and interactive kiosks explaining the story of the pioneers. Visitors can take free guided tours. The Cody Mural Chapel is ADA accessible, and public restrooms are available. For more information about visiting the Cody Mural Chapel, click or tap here.

Latter-day Saints in the Cody area worked with Church leaders to build this chapel in the 1940s. The Saints in Cody commissioned Edward T. Grigware, a renowned mural painter from Chicago, to paint the mural. Grigware, who was not a Latter-day Saint himself, spent a year researching and understanding the history of the Church, which gave him a respect and love for the early members of the Church. The mural depicts several important scenes in the Restoration, including Joseph Smith receiving the golden plates from which he translated the Book of Mormon, the martyrdom of Joseph and Hyrum Smith, and the pioneers trekking to the Salt Lake Valley and building a temple where they could worship God. Portraits of the first eight Presidents of the Church are interspersed among depictions of these stories.

Elder Henry D. Moyle first dedicated the chapel in 1949. Since then, the building has been renovated several times and the original mural preserved. In 1972 Elder Hugh B. Brown rededicated the chapel. For information on other historic locations in Wyoming related to the history of the Church, click or tap here. 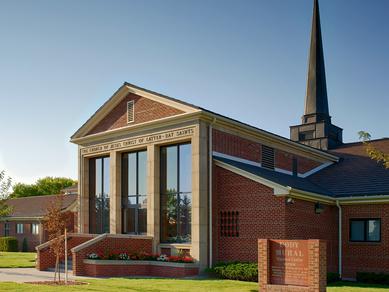