Brigham Young was born June 1, 1801, in Whitingham, Vermont. In 1835, three years after he joined the Church, he was called to the Quorum of the Twelve Apostles. As successor to Joseph Smith, he led the migration west in 1846–47 to the Rocky Mountains and founded Salt Lake City. He was sustained as President of the Church on December 27, 1847.

As Church President and territorial governor of Utah, he established Latter–day Saint settlements in Utah and throughout the American West. Under his direction, construction commenced on the Salt Lake, St. George, and Logan temples. He brought the telegraph and the railroad to Utah and encouraged cooperative industry among Latter-day Saints, and he encouraged excellence and refinement in every aspect of life. He died August 29, 1877, in Salt Lake City, after nearly 30 years as Church President. 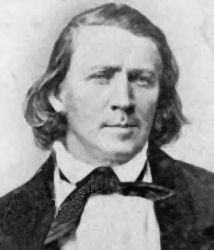